Fortnite and Final Fantasy. A doomed pairing of the most lucrative recent gaming phenomenon with one of the most storied video-game franchises spanning over 30 years? I love Final Fantasy, mostly. I’m lukewarm on Fortnite and the battle royale format in general. With Metroid Dread, Shin Megami Tensei, Alan Wake Remastered and Deathloop on my to-do list, why am I still glued to a free-to-play mobile game?

Probably because it’s expanding the already very-expanded Final Fantasy VII universe. The game that got the sequel CGI movie, the remake, multiple mobile games and more. And yet, barring a smart intro movie that cribs from the opening scenes of FF7R, you won’t see the protagonists (or antagonists) of the iconic RPG — though you’ll be able to cosplay as them.

In First Soldier, you play as, well, recruits looking to become the first Soldier — a specific top-class army member. Cloud, from FFVII, is introduced in the original as “Soldier, First Class” and this game takes everything back 30 years to the early formation of Shinra Corp’s military finest.

The setting, then, is a battle royale to see how augmented soldiers fare against each other (and whatever beasts come their way in the process). The battleground is a surprisingly expansive map on the outskirts of Midgar — while also featuring many of the major landmarks of Midgar’s sectors. Aerith’s church and childhood home is there to be shot at, as is the arena, Sector 7’s markets, the abandoned trainyard and more. The battle theme of FF7 kicks in as helicopters swarm into the area, dropping off recruits. It still gets me excited every time.

The grounds are littered with guns, from handguns to sniper rifles, as well as materia (magic orbs that offer both offensive and support capabilities) and even pretty rare summoning spells. I’ve yet to summon anything so far. There are also potions to pick up and help extend your chances of survival.

These are the baseline weapons and items. Differentiating itself from Fortnite — if not all BR games; we see you Apex and Warzone — you can also choose a job role, a la most RPGs. This mostly affects your special ability, your melee weapon and how you attack with it. Warrior is a straight-shooting class with a sword and a rush special that closes distance so you can wallop your rivals before they can get a shot in. Monks have the ability to heal themselves when they mete out damage, while Ninjas get an extra jump and the ability to hide in stealth mode for a few seconds. 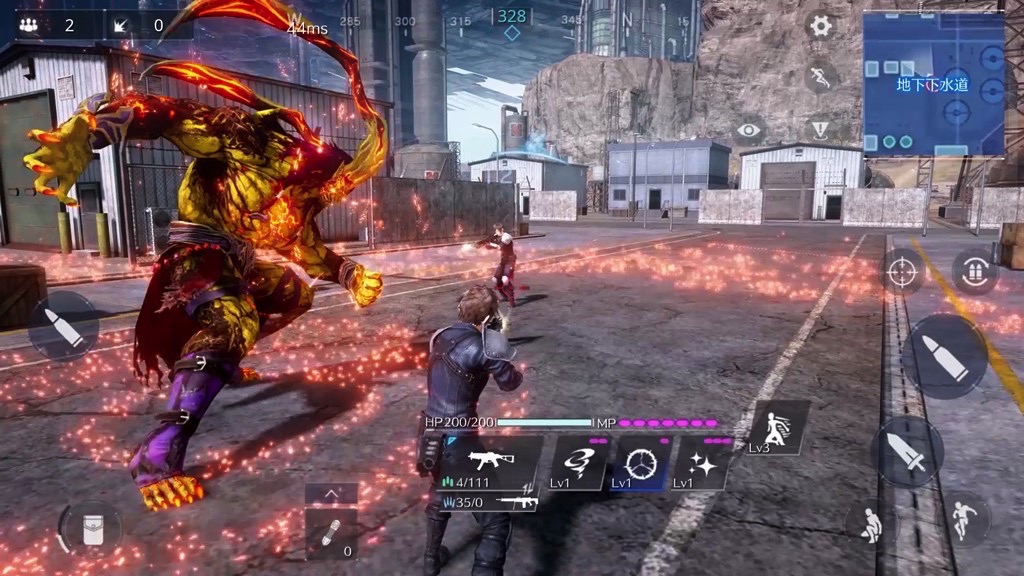 Sorcerers come with a special ability that supercharges MP recovery for more regular offensive (and healing spells), while the ranger reloads guns faster than the others — and has a very convenient Assess skill that will mark threats around you even when they’re out of sight.

Each feels slightly different to play with, but there’s a pleasant balance to the different roles, though both soldier and monk suffer from having to rely on their melee attack for their advantages.

Let me say this outright; you should play First Soldier with a gamepad. Fortunately, I’m testing out Backbone, a third-party connected controller for iPhone that means I was already in a good place to aim my guns and spells. Magic casting controls are a bit messy — you’ll need to hold down an L-trigger while pressing another collar button to unleash one of three spells you may have picked up. Those melee attacks, which all job classes have, are really hard to land on your enemies, regardless of whether you’re using a gamepad or touch controls. Hopefully, the devs are able to finesse melee attacks as the game progresses.

This means that, in a rather un-Final Fantasy way, you’ll come to depend on your guns for most of your kills. But hey, getting that sniper headshot kill is a thrill. Killing other players or monsters, opening chests and surviving through the rounds will level up your character through the match itself. This adds to your attack damage and increases your HP, meaning you should also last longer. It also rewards proactive play and exploration, and not just trying to survive to the final area.

As you might expect from a free-to-play battle royale game, there are season passes available for purchase. These offer up skins, banners, emotes and more cosmetic goodies for wannabe Soldiers. Even without a pass, you can earn a few rewards by fulfilling “rank” criteria during the battles. Gain stars, level up your rank — which is unrelated to leveling up your individual job ranks — and you’ll gain access to a smattering of wardrobe options or chocobo-raising items. I’m currently wearing a moogle hat, please say hi.

Yes, there’s also a chocobo rearing mini-game buried inside First Soldier, and you’re able to summon your favorite steed to the battles as a very handy transport option. It isn’t the only way to speed around levels, however. There are also cars and bikes to get you within the battle arena. The shrinking arena damages anyone outside its perimeter, but you’re able to persist with potions and healing spells and hopefully make it to safety.

The only drawback growing, as I play, is the fact that my leveling up has no tangible effect on my performance in the game — which is true of most battle royale games. The appeal is that each new battle isn’t affected by the round before it, but then chasing these goals (play two rounds as a warrior; make 300 pts of damage with a shotgun; visit Corneo’s mansion) soon tires. What exactly is the point?

For now, the point is that First Soldier skirmishes are entertaining, and the difficulty curve isn’t too brutal. I’ve won a few rounds, out of 75 players, and come second a handful of times. One colleague told me that early iterations of battle royale games are often filled with bots to juice the numbers (and offer up some encouraging early wins) but I will not let him take this tiny victory away from me.

Hopefully Square Enix has plans to offer more levels, weapons and events to spice it up. There are some limited-edition bosses throughout the Midgar level. I’ve managed to best two of them, but I’ve also been felled by Tonberry — a notoriously powerful monster from the Final Fantasy series— a few too many times. Maybe I should try fighting him as a ninja…

Final Fantasy VII: The First Soldier is out now on Apple App Store and Google Play.

The article ‘ ‘Final Fantasy’ meets ‘Fortnite’ is more fun than it should be ‘ Previously Appeared on: https://www.engadget.com/final-fantasy-meets-fortnite-the-first-soldier-review-140024318.html?src=rss